We saw Canadian singer/songwriter Shawn Mendes bring out his acoustic guitar and pour his heart into a rendition of “Stitches” at the 2015 MuchMusic Video Awards. Today, after weeks of social media teasers and anticipation, we finally have a brand new full music video for the Handwritten album track.

The music video showcases the 16-year-old musician in an empty parking garage with a sexy muscle car. As he gets out of the vehicle and walks through the vacant concrete space, he is pushed around by an invisible attacker and knocked down.

By the end of the clip, Mendes has been dragged though garage, the car’s windows have been smashed and all that’s left is for the singer is to pull himself together and clean himself up.

However, when he enters the dimly lit bathroom to splash some water onto his face, not only does he wash away the sweat and dirt, but the blood, cuts and black eye that we saw him develop in the previous scene.

What we can gather from this is that (in partnership with the song) the music video seems to use the physical fight as a metaphor for the unseen battle that can carry on long after a relationship has ended.

“Stitches” is the third single from Mendes’ debut record behind “Something Big” and “Life of the Party” and has a previous music video with more than 9.9 million views.

The tune is unique because it is among the very few songs on Handwritten that is not co-written by Mendes but instead owes its credits to Daniel Parker, Teddy Geiger and Daniel Kyriakides.

Here is a sample of the track’s lyrics:

Watch Mendes’ live performance of “Stitches” at the MMVAs below.

Tune in to The Gracie Note weekly for brand new videos on YouTube! 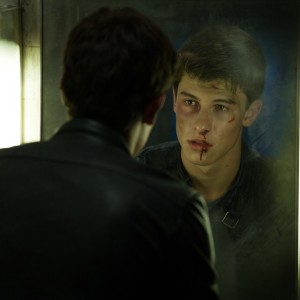 (At press time, viewing was restricted to Buzzfeed’s Vevo link. However, the music video can now be viewed in this post. Thank you!)