On April 24, “Suicide Squad” director David Ayer premiered the first official photo of musician / actor Jared Leto as the Joker to celebrate the 75th anniversary of the DC Comic villain.

Leto is posed for madness in this picture. The performer is mid-scream while grabbing his head and showcasing his fluorescent green hair, capped teeth, sunken eyes and menacing tattoos.

The Thirty Seconds to Mars frontman is currently in process for his role in “Suicide Squad,” which also features actors like Will Smith, Tom Hardy and Margot Robbie. Leto has been posting his training efforts on Instagram and it looks like the Joker could be even more muscular than in this initial photo.

In contrast, the 43-year-old artist also posted a portrait on April 30 of his Academy Award-winning “Dallas Buyers Club” role Rayon with the caption “Miss you.”

If the level of commitment that Leto was willing put into the creation of Rayon is any indication of his capacity to throw himself into an acting role, then we are all in for the ride of our lives when his Joker comes to town.

Here are 10 things you might not know about musician, humanitarian, actor, entrepreneur and tree hugger, Jared Leto.

1. Thirty Seconds to Mars has the Guinness World Record for Most Shows Played During An Album Cycle.
The band, which consists of Jared Leto and his brother Shannon Leto (drummer) and guitarist Tomo Milicevic, performed 309 shows in support of their record “This is War.”

2. Jared Leto dives deep into album art.
Leto talked about the cover art of “Love, Lust, Faith + Dreams” to Yahoo Canada Music and revealed why he was inspired by English artist Damien Hirst’s Spot Paintings series and the “joy of colour,” saying, “This new album is very focused, there’s a lot of space, it’s at times very minimal and [also] at times a celebration.”

He continued, “It was great to work with his art and have him be part of the video and have his work grace the cover of our album … I think that something about the ‘joy of colour’ feels like a rebirth, a renewal, and this album feels that way for us, too. I also think that ‘Love Lust Faith + Dreams’ are like the four elements of the emotional life.”

3. Jared Leto comes across as a team player.
If you have ever watched “The Making Of…” any of the band’s music videos or behind-the-scenes action, you will see nothing but teamwork. They seem like they feed off each other’s energy and even though Leto leads with his creative vision, Shannon, Milicevic and the crew are always up for what Bartholomew Cubbins has in store fore them.

4. Jared Leto’s alter ego is Bartholomew Cubbins.
If you are in the Echelon of Thirty Seconds to Mars fans, you have probably known Mr. Cubbins since before the band changed their logo. You can find the moniker at the end of many older music videos like 2006’s “From Yesterday.”

5. Jared Leto takes his music wherever he goes.

When Leto starred as the transgendered Rayon in 2013’s “Dallas Buyers Club” the Thirty Seconds to Mars track “City of Angels” from Love, Lust, Faith + Dreams also earned a spot of the film’s soundtrack.

6. Jared Leto starred in “Fight Club.”
In case you forgot, Leto played Angel Face in the 16-year-old flick with Edward Norton, Brad Pitt, Helena Bonham Carter and Meat Loaf. However, the first rule is, we can’t talk about it.

7. He’s not afraid to paint his face.
Seeing Thirty Seconds to Mars live in concert is an experience like none other. Check out these photos of Leto in his full hair and stage make-up ready to perform. We are huge fans of the #MARShawk

8. Jared Leto reminds us that we are powerful.
In a February interview with Billboard, Jared said that he came to this realization in his mid-20s after Shannon came to Los Angeles where he was living and working on television shows like “My So-Called Life” with Claire Danes. The quote was: “No one has to give you permission to make music or make art.”

9. He is connected to world events and fans also get involved.
The singer has spoken out about causes in devastated areas like Japan and Haiti and Thirty Seconds to Mars fans have extended their support by creating their own groups like Echelon Conference: The Gathering. Not only do they support outwards causes, but they also support the group and seem to have formed bonds with other fans that can only exist when music.

10. All songs on Thirty Second to Mars’ discography are written and composed by Jared Leto.
Aside from a few tracks like “Convergence,” which was written by Shannon Leto and appears on Love, Lust, Faith + Dreams, most songs by Thirty Seconds to Mars are written and composed by Jared Leto.It feels like he has a passion for his ideas and can communicate them effectively to his team. The team, including Shannon, Tomo, the recording engineers, producers, music video directors, album cover creators, social media curators, understand him, support him, and seem like they will do anything to be on board with the vision.

You can see all of this and more in the documentary “Artifact.” At press time, it is available on Netflix Canada. (If you are a subscriber.) Check out the trailer below.

Watch a new episode of The Gracie Note every Friday on YouTube! 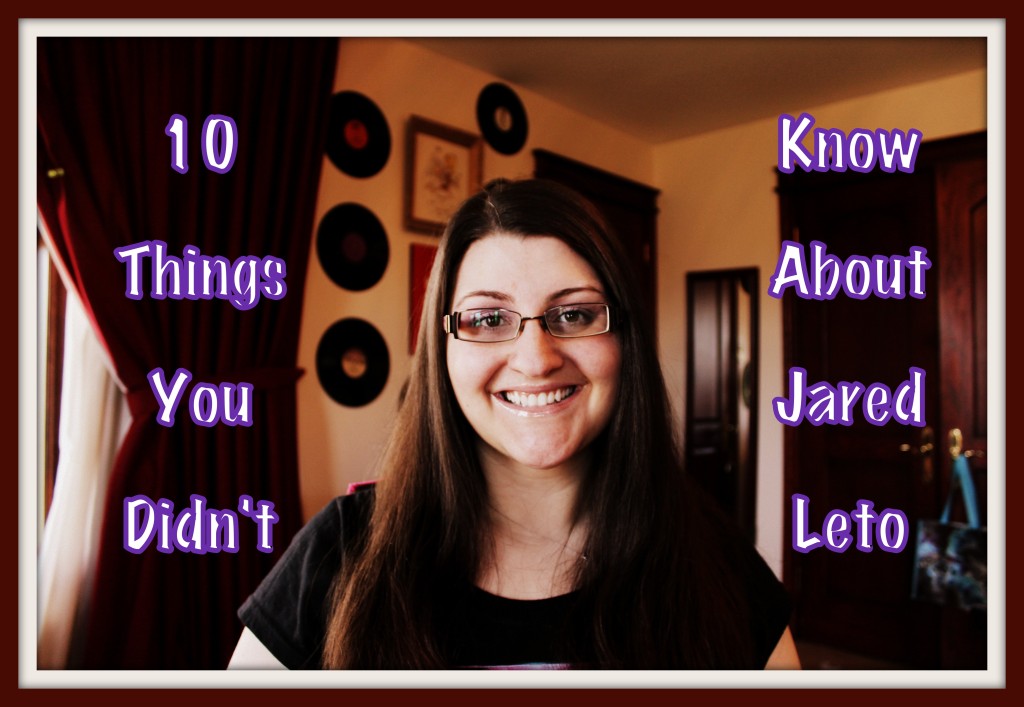