On June 5, a brand new trailer for the boxing drama featuring Jake Gyllenhaal, Forest Whitaker, Rita Ora, 50 Cent and Canadian actress Rachel McAdams was released. The intense look into the film, which honours the life of fighter Billy “The Great” Hope, is  brought to the next level by the musical skill of Eminem and his anthem for the movie, “Phenomenal.”


According to Rolling Stone, Eminem serves as executive producer for “Southpaw’s” official movie soundtrack, which will be released on his music label Shady Records.

“Eminem has dedicated himself to ensuring that this film captured his passion for the project through his music,” the rapper’s manager and Shady Records president Paul Rosenberg said. “We’ve assembled a great soundtrack to accompany what’s sure to be one of the finest boxing films ever.”

“Phenomenal” was released on June 1 and features lyrics that draw parallels between the film’s character of Hope, a left-handed boxer who loses his wife and must struggle to get back to the top, and Eminem’s real life writing habits.

Check out a sample of the lyrics below:
I write with the left, same hand I hold the mic with
As I fight to the death, ’til my last breath
Managed to prove who the best man is
Surveil it, all cards be the only ones left standing
In the end, but I ain’t gonna be the only one with the advantage
Of knowing what it’s like to be southpaw
Cause you can bet your ass you’ll be left handed
Cause I am

“Southpaw” hits theatres on July 24. Listen to Eminem’s “Phenomenal” below. 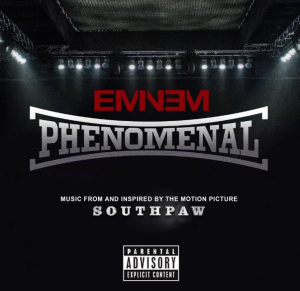