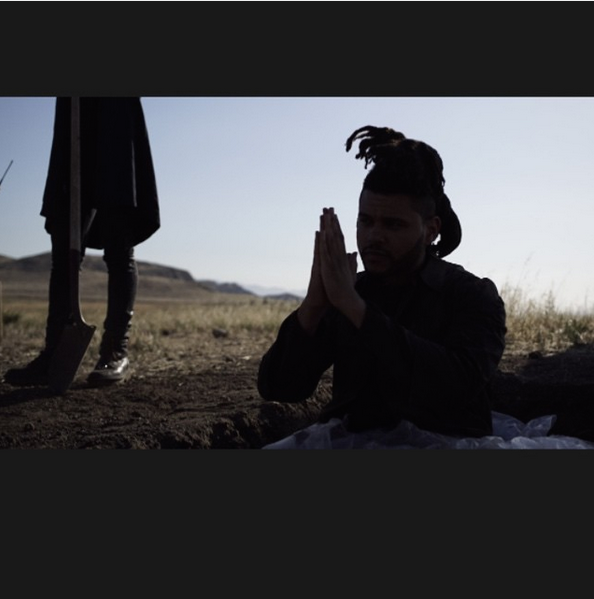 On August 28, the world will hear The Weeknd’s (also known as Abel Tesfaye) brand new album Beauty Behind the Madness in full.

Leading up to this record’s release, fans have had tunes like “Earned It,” “The Hills” and the summer anthem “Can’t Feel My Face” to wet their music appetites with, however, none have been like the Kanye West produced song “Tell Your Friends.”

The Weeknd dropped his music video for the track directed by Grant Singer on August 24 and after only four hours of online release, at press time it has over 204,480 views.

The clip opens in a deserted field with the first shot on a burning tree or bush, which brings to mind the story of Moses and the Burning Bush from Exodus 3. Then we see The Weeknd walk towards a pile of dirt carrying a shovel and begin to bury a body that is in a clear plastic bag and has already been placed in a hole in the ground.

As this action takes place, the opening verse featuring these lyrics can he heard:

“Tell Your Friends” Lyrics:
“We are not the same I am too reckless
I’m not tryin’ go in that direction
These n****s they been doing too much flexing
And they’re about to call the wrong attention
And I ain’t got no patience, no more testing
I do shit how I want, don’t need no blessing
XO n****s ain’t nothing to mess with
Nobody stopping us, oh no we’re destined
And everybody around you is so basic
I’m never rocking white, I’m like a racist
I don’t drink my liquor with a chasin’
And money is the only thing I’m chasin'”

During the burial, the camera gives us a close up of the body in the grave and we learn that it is The Weeknd himself.

Together, it seems like the song and music video are the musician’s post-mortem discussion for his life before and after success. In the second verse of “Tell Your Friends,” The Weeknd reminisces about what times were like prior to his moments of achievement and the things that have changed in his world.

“And I miss my city man it’s been a minute
M.I.A. a habit, Cali was the mission
Cruise through the west-end in my new Benz
I’m just tryin’ live life through a new lens
Driving by the streets I used to walk through
When I had no crib I guess you call that shit a miracle”

Check out The Gracie Note on Tumblr and Instagram!